The Blue Sucker concentrates in "chutes" or rapids where the water is deep and the bottom is rocky, wholly free of silt in the Neosho River. This species probably spawns in spring, scattering its eggs on rocky bottoms in the current often migrating upstream. In summer, the young are found along gravel bars in slightly shallower water and less swift currents than adults. They feed off of insects and probably microorganisms including algae attached to stones on the bottom.
Blue Suckers occur in the Missouri, Kansas, and Neosho rivers, where they occupy swift currents in the main channels. Many have also been found in the stilling basin where water is discharged into the river from John Redmond Reservoir in Coffey County. 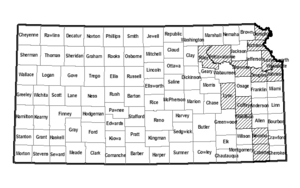