There are more than 10,000 miles of streams and rivers in Kansas 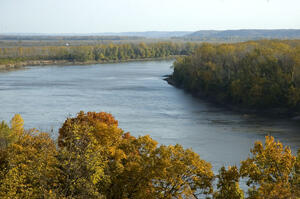 Most streams and rivers in Kansas are privately owned. The public rivers are the Kansas, Arkansas and Missouri (shown at right). They are open to the public between the ordinary high water marks on each bank. This is the line that can be seen where high water has left debris, sand, and gravel during its ordinary annual cycle. When these rivers flow through private land, permission is needed from adjacent landowners to access the rivers as well as when picnicking, camping, portaging or engaging in any other activity on the adjacent private lands.

Except where they pass through the legal limits of a government entity, the rest of our streams and rivers are privately owned, and permission is needed from the landowners to access and use the streams and adjacent lands for any purpose.

ARKANSAS RIVER AND NATIONAL WATER TRAIL
The sixth longest river in the U.S.

The Arkansas River travels about 1,469 miles from its origin near Leadville, Colorado, through Kansas and Oklahoma to its confluence with the Mississippi River at Napoleon, Arkansas. In Kansas, the Arkansas River is pronounced “Ar-Kansas,” and is sometimes shortened to the “Ark River.” A 192-mile portion of the Arkansas River in Kansas was designated as a National Water Trail on June 3, 2016. The trail begins in Great Bend and ends at the Kansas-Oklahoma border southeast of Arkansas City. The Ark River is prone to seasonal reductions in flow. When the flow is low, the river divides into several small channels flowing in a broad, shallow bed. During drier periods, it may run dry on its surface in southwest Kansas, but picks up water as it flows through the state. By the time it reaches Wichita, there is often plenty of water for a scenic, leisurely float trip.

The Missouri River flows through the northeastern border of Kansas – separating Missouri and Kansas – and travels through 10 states on its journey from its origin near Three Forks, Montana to the Mississippi River at St. Louis, Missouri. In Kansas, the cities of Atchison, Leavenworth and Kansas City are among the communities that settled on the Missouri River.

Many streams provide excellent channel and flathead catfishing, and those in the east and southeast may also hold spotted bass. A little research and legwork visiting with landowners could open some great stream fishing. 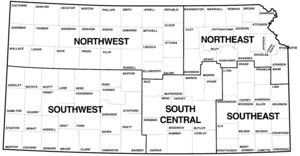