The lampreys are primitive eel-like fishes which differ from true fishes in the absence of jaws and paired fins and the presence of gill pockets rather than regular gills. The Chestnut Lamprey has a round, sucking-disk mouth, a keel-like rayless fin along the back and around the tip of the tail. Growing to a length of 14 inches, Chestnut Lampreys are gray to greenish-gray in color with a pale belly.
The Chestnut Lamprey is currently known to occur occasionally in the lower Kansas River and may occur in the Missouri River main stem. It may have formerly occurred in larger rivers throughout eastern Kansas. These lampreys are parasitic in their adult stage, preying on large fish such as carp and buffalo. Spawning occurs in smaller tributary streams in swift shallow riffles where the gravel is clean. The larvae remain in bottom sediments of pools, feeding on microorganisms, for several years before reaching maturity. 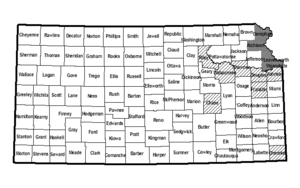