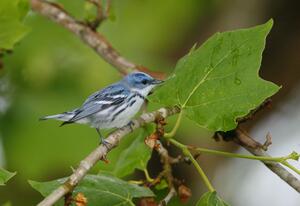 The Cerulean Warbler can be found in mature, deciduous trees along rivers. In the western part of Kansas, they might be found in shelter belts, along rivers, or in towns mainly in the canopies of trees. They are known to feed on caterpillars and small arthropods.
This bird is a rare transient and summer resident in the eastern part of the state and a casual transient in the west. They arrive in the eastern part of Kansas around April 24 and depart between August and the middle of September. The first Cerulean Warbler nest was found in a silver maple tree on May 26, 1985 and was located near the Marais des Cygnes Refuge in Linn County.
The Cerulean Warbler needs mature deciduous forests, both upland and riparian, with closed canopy floodplain forest preferred. 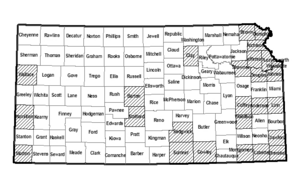