The Crawfish Frog originally inhabited low wet meadows in tallgrass prairie, although populations do persist in non-native grasslands. They require heavy spring rains and fishless temporary pools that persist into May or June for successful reproductions.
This species has considerable range in Kansas and remains common in many areas. They range from south of a line from Lyon to Johnson counties and east of the Flint Hills. Distribution has changed little, although populations in Douglas County have apparently been extirpated. There are populations throughout their range in Kansas. Populations have gradually declined in Kansas. 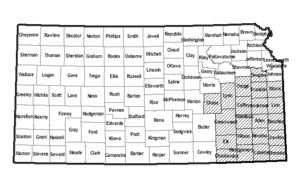