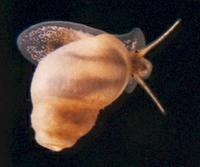 The delta hydrobe is a very small (<5mm long) aquatic snail. Its diminutive size and flattened apex make it readily identifiable. While most aquatic snails in Kansas possess lung tissue (pulmonate snails) and get their oxygen from the air, the delta hydrobe is one of only five Kansas snails that have gills (prosobranch snails). The only place in Kansas where the Delta hydrobe can be found is in Cedar Creek, Chase County. This cool, clear, spring fed stream probably maintains high concentrations of dissolved oxygen; an important habitat attribute for a gill-breathing snail. The delta hydrobe can be considered a living Pleistocene relic and is rare in surrounding states. The next nearest location to the Cedar Creek population is over 200 miles to the east in Missouri. The species does not occur any longer in Nebraska and is considered rare in Iowa and Illinois. 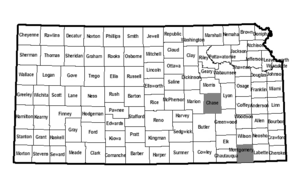 Delta Hydrobes are protected by the Kansas Nongame and Endangered Species Conservation Act administrative regulations applicable thereto. Any time an eligible project is proposed that will impact the species’ preferred habitats within its probable range, the project sponsor must contact the Ecological Services Section, Kansas Department of Wildlife, Parks and Tourism, 512 SE 25th Ave., Pratt, Kansas 67124-8174. Department personnel can then advise the project sponsor on permit requirements.