The Eastern Hognose Snake lives in widely varying habitats, from the forested areas of eastern Kansas to the open prairies along the Colorado border. It prefers sandy areas and is most common along valleys of rivers and in the eastern tier of counties.
Mating occurs during April and May after emergence from winter inactivity. Courtship is not known. Females lay a single clutch each year. The numbers of eggs vary from 4-61 with an average of 22. They feed primarily on frogs and toads, although it has been recorded that they eat salamanders.
This snake ranges statewide except perhaps for the northwest corner. It has been documented in over forty-seven counties in recent years. It has declined in at least one site, but there is no evidence of widespread declines. Most of Kansas (except along the eastern border) is not optimal habitat for this snake and populations of this species in Kansas are probably somewhat isolated. 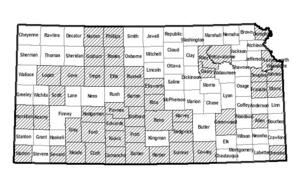