The Greenside Darter inhabits deep, swift riffles over rubble bottom. It requires permanent flow and is most abundant in streams having a large, stable volume of flow, allowing the growth of filamentous algae on riffles. The water must remain clear and cool. They spawn in April in Kansas. Eggs are deposited near the bases of dense stands of algae attached to stones in fast water. This fish feeds on all small animals, including insects, that live on the surfaces of stones or attached vegetation along the stream bottom.
This species originally occupied streams in the Kansas River basin as far west as Manhattan, and probably occurred more widely in the Osage and Arkansas river system than it does now. It has been taken recently only in the Osage and Spring Rivers. There are two subspecies of Greenside Darters in Kansas: Etheostoma blennioides newmani in the Spring River system in Cherokee County and Etheostoma blennioides pholidotum in the Osage River drainage in Bourbon County. 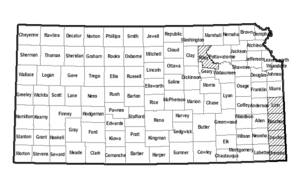