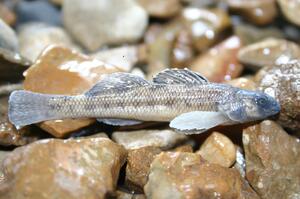 The historic range of the Johnny Darter extended throughout most of northern Kansas. Today it is found mostly in small streams in the Flint Hills in the Kansas River basin. The Johnny Darter has also been collected in small streams in the Marais des Cygnes, Little Osage, lower Kansas, and Spring river basins, but these sites probably do not account for a substantial proportion of the overall population in Kansas. The Johnny Darter is seldom numerous, but remains common in many streams within its range. Its habitat is shallow pools with little current, but sometimes is found in adjacent riffles. The Johnny Darter is typically more abundant in streams than rivers, and can tolerate greater turbidity than most darters. The main diet of the Johnny Darter is bloodworms. Spawning occurs in April and May within a nesting territory consisting of sloping stones. Females invert to attach eggs to the underside of the stone. The male remains to guard the nest and young. 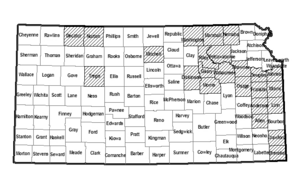