Historically, the Lake Sturgeon had a large range, including the St Lawrence-Great Lakes basin, Lake Champlain, Hudson Bay, Mississippi River basin from Minnesota to Louisiana, including the Missouri River upstream to South Dakota. Northern populations are relatively stable, but it is becoming rare or extirpated in the southern part of its range, including the Missouri river drainage. It is considered endangered by the State of Missouri, and an action plan has been implemented to restore populations in that state. Lake Sturgeon collected in Kansas most likely are from the propagation and stocking effort by Missouri. A ban on commercial harvest of Lake Sturgeon has existed since 1970, but prior to that time, local populations were reduced by up to 80%. Lake Sturgeon were harvested for their eggs (caviar) and as smoked fish. Habitat preference is bottoms of large, clean, freshwater rivers and lakes with firm sand, gravel or rock substrates, in deep (four to nine meters) water. A Lake Sturgeon female will not produce eggs until approximately 20 years of age. Maximum age is reportedly 152 years. This primitive fish is slow-growing but can attain a length of 8 feet. 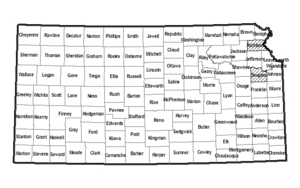