This freshwater mussel has an elongated, compressed shell which is thick to moderately thick. The exterior color ranges from yellow to tan to brown with fine, wave rays over most of the shell. The inside of the shell is white. Maximum length is approximately 6 inches.

It is an obligate riverine mussel preferring gravel substrate with clean flowing water. Historically occurred in the main stems and major tributaries of the Verdigris, Neosho and Spring Rivers. It still occurs in many of these areas, but at much reduced numbers. 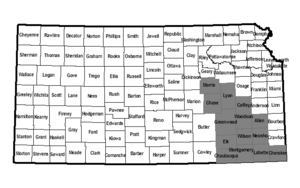 Ouachita Kidneyshell Mussels are protected by the Kansas Nongame and Endangered Species Conservation Act and administrative regulations applicable thereto. Any time an eligible project is proposed that will impact the species’ preferred habitats within its probable range, the project sponsor must contact the Ecological Services Section, Kansas Department of Wildlife, Parks and Tourism, 512 SE 25th Ave., Pratt, Kansas 67124-8174. Department personnel can then advise the project sponsor on permit requirements.