The Pallid Bat is known only from Barber County where it hibernates in the caves and rock crevices during winter. In summer, it uses buildings or crevices in cliffs or hollow trees during the day. Night roosts are used for feeding and resting.
Breeding takes place in autumn and ovulation occurs during spring. The female has 1-2 young and has a strong bond with them. She flies with them to and from day and night roosts. The Pallid Bats feed on insects such as grasshoppers, crickets, ground beetles, and scorpions. They belong to a small group of bats called gleaners meaning they catch their prey on the surface of the ground. Owls, hawks, and predators that forage in caves prey on the Pallid Bat. 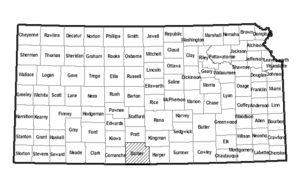