The River Redhorse inhabits pools and deep, flowing waters which are clear and unpolluted. They usually spawn in May on gravel shoals. Shallow nests are prepared, and the eggs are covered with gravel after being released and fertilized. This fish feeds mainly on mollusks (small clams) and several kinds of larval insects that cling on or burrow into the bottom.
The River Redhorse has been taken recently in the Spring, Neosho, and Verdigris rivers. Formerly, it also inhabited the Kansas and Osage rivers. Only a few River Redhorses have been seen in the past twenty-five years. Early records indicate that this species was fairly common in the larger rivers of the eastern third of the state. It has declined throughout its range in the Mississippi valley. 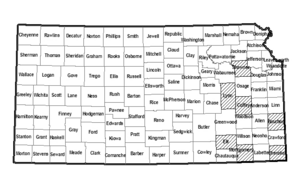