The Round Pigtoe Mussel is an obligate riverine species preferring larger perennial rivers where it occurs in gravel substrates with swift currents. Stable populations occur in the Spring River and declining populations are in the Fall, Little Osage, Marais des Cygnes, Neosho, and Verdigris rivers. Fish hosts are not confirmed, but bluegill is a probable host. 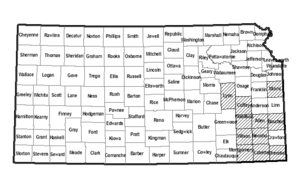