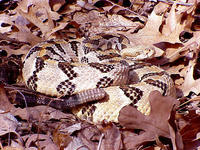 The Timber Rattlesnake is found along heavily vegetated, rocky outcrops on partially forested hillsides. It is restricted to the eastern third of Kansas and ranges no farther west than the Flint Hills. They are diurnal during spring and fall but prowl at night during the summer months to avoid the higher daytime temperatures. It is active from April to October and prefers air temperatures of 80 to 90 degrees F.
Although this snake may travel over thirty yards during a day to seek areas of abundant food, it frequently spends long periods of time coiled and immobile, patiently waiting for prey to approach. Females wander less than males. The females do not feed during pregnancy, relying on fat storage to maintain them. This species feeds on mice, rates, squirrels, rabbits, bats, and other small mammals.
This shy snake has a fairly mild disposition compared with the prairie rattlesnake or massasauga. When approached, it frequently remains motionless and quiet in order to avoid being seen. 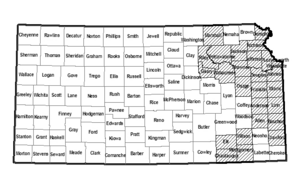