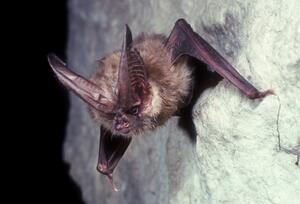 The Townsend's Big-eared Bat is a year round resident in Kansas and is known only from the south central part of the state (Barber, Kiowa, and Comanche counties). It hibernates in small clusters in caves from October to April and inhabits natural caves, mines, and buildings in the summer.
The bats fly at night and do not leave their roost until well after dark. Their flight pattern is near the ground and rather rapid and twisting, although they may hover and flutter. They feed on nocturnal insects, mostly moths, in the air, from foliage, or the ground. These mammals feed, return to night roost, feed again, and then on to their day roost. They have one offspring a season.
Raccoons and snakes that hunt in caves and, to a lesser extent, hawks and owls, are their principal predators. These bats live from 4-10 years; maximum longevity record is sixteen years. 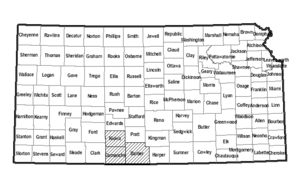