The Farlington Fish Hatchery is north of Girard in Crawford County. Construction of this facility began in 1939, was interrupted by World War II, and was finished shortly after the war. Thirty earthen ponds provide more than 32 surface acres of water, which is supplied by Crawford State Fishing Lake. 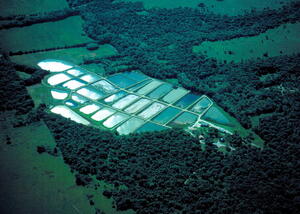 The Farlington Fish Hatchery has undergone several renovation projects since 1989. Among these are a new "fish house" used for hatching, sorting and holding fish, rebuilding of some pond dikes to reduce leaks and construction of new water control structures and harvest "kettles".

Tours are available by prior arrangement by calling (620) 362-4166. April and June are the best times to find a variety of fish in the fish house. Most fish are reared in ponds and are not readily viewable.

Watch a video on Farlington Hatchery