Big game hunting in Kansas is a relatively new heritage because nearly all big game species were extirpated from the state by 1900. Prior to settlement, the prairies of Kansas were home to tremendous herds of bison, elk, mule deer, and pronghorn antelope. In the timbered areas of eastern Kansas, white-tailed deer were abundant. The first modern deer season was held in 1965, and permits were limited. Today, white-tailed deer thrive statewide and permits for residents are sold across the counter. Mule deer are still common in western Kansas, though permits to hunt them are limited. Pronghorn antelope are limited to far-western counties where large areas of native prairie are still found, and residents can hunt them if they receive a coveted permit in the annual drawing. Similarly, elk are hunted through very limited permits. The only free-ranging elk herd in Kansas is found on the Fort Riley Military Reservation in Riley County. Hunters can receive a Kansas Trophy Certificate if the antlers or horns from a deer or antelope they kill achieves a minimum score. The department also maintains an unofficial Top 20 list for deer and antelope.

The first case of CWD was found in a captive bull elk in Harper County in 2001. As of 30 June 2022, CWD has been detected in 738 cervids, including 2 captive elk, 1 captive mule deer, and 735 wild, free-ranging deer. All Surveillance Zones in Kansas now have CWD detections. CWD surveillance began in 1996 and, to date, 33,312 cervids have been sampled and tested for CWD. Hunters and other wildlife enthusiasts can avoid the human-assisted spread of CWD by not transporting a live or dead deer or elk from areas where CWD occurs. HUNTERS ARE ENCOURAGED TO USE ELECTRONIC DEER CHECK-IN OR LEAVE EVIDENCE OF SEX ATTACHED TO THE CARCASS. THEN, BONE-OUT DEER, AND LEAVE CARCASSES IN THE COUNTIES WHERE DEER ARE TAKEN. MOVING CARCASSES MOVES PRIONS AND CWD TO NEW LOCATIONS! There is currently no known treatment or eradication method for CWD, so preventing the introduction of the the disease into new areas is of utmost importance to the health of local deer herds. Baiting and feeding deer tend to concentrate deer at small point on the landscape, often with the trails leading to the feeding sites resembling the wheel spokes of a bicycle. Anytime animals are concentrated at this type of "hub," the likelihood of disease transmission increases in a deer herd. More alarming, the transferring of CWD prions to healthy deer is not the only concern. Diseases such as bovine tuberculosis, foot rot bacteria, fungal pathogens, and a host of detrimental parasites, including exotic lice, flukes, roundworms, mange mites, lungworms, and barberpole worms are transmitted more efficiently when deer are concentrated in a small area, especially around feeding stations. Think of future generations of hunters and do your best to lower wildlife disease transmission risk.

Watch this video to learn how to extract the correct lymph nodes for CWD Testing.

Another major concern is the potential for CWD to spread from captive cervid farms into the wild cervid populations. Once a disease gets into a wild population of animals, it is virtually impossible eradicate. KDWPT recommends that every captive cervid operator enroll in the voluntary CWD monitoring program administered by the Kansas Department of Agriculture, Animal Health Division. The sooner diseases such as CWD can be detected in captives, the sooner control efforts can begin and possibly prevent disease from spreading to wild populations of the state. CWD is only one of many diseases that could go undetected in an unmonitored captive cervid herd. Bovine tuberculosis and Foot and Mouth Disease (FMD), for example, are serious diseases that could seriously damage not only populations of deer and an annual 350 million-dollar hunting economy, but could also threaten the 6 billion-dollar Kansas cattle industry via quarantines, loss of accreditation, and loss of global export. 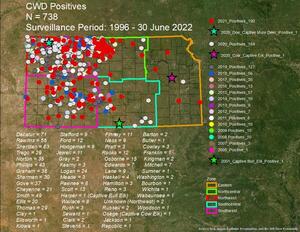 IMPORTANT: Help Control the Spread of CWD and CWD Prions in Kansas!!

1. Complete an Electronic Check-In for deer taken with Antlerless Only permits. Deer taken with an either sex permit can be deboned in the field without Electronic-Deer-Check-In. The tag stays with the meat!

2. Remove the musculature (deboning) from the carcass and leave the carcass at the kill site. Make sure to complete Step 1 first.

3. If at all possible, do not transport a carcass from counties known to have CWD (see map to the right) to other counties. Use electronic deer check-in: https://programs.ksoutdoors.com/Programs/Electronic-Deer-Check-in for deer taken with Antlerless Only (AO) permits.

4. If you have to transport a whole carcass away from the kill site, take or send the deboned carcass, spinal column and head to your county landfill for disposal, once you have deboned the carcass at your place of processing. Don't carelessly discard this material where other deer and scavengers can contact it. Careless discarding of a cervid skeleton could potentially start a CWD hotspot in your area.

5. Keep the deer permit/tag with the meat. For more information about CWD, visit the CWD Alliance website at http://cwd-info.org/.

CWD Regulations for Kansas and Other States

National Wildlife Health Center (USGS) has links to current research and popular articles such as “The Quiet Spread of CWD” which appeared in Field & Stream.

Centers for Disease Control and Prevention has information about CWD and humans.

American Veterinary Medical Association has information about precautions hunters and anyone who spends time outdoors should take to protect themselves from potential risks.