The lake has a steep to shallow rocky shoreline and shallow mudflats on the upper end. Water clarity is usually very good. Eight fishing piers and many rock and brush fish attractors enhance angling opportunities at the lake. Fair to excellent populations of channel catfish, black bass, saugeye, crappie, white bass, and bluegill are found in the lake. Adjacent uplands primarily consist of native grass prairie. A diversity of wildflowers exists on the property and can provide outstanding viewing opportunities. Several small woody draws also exist on the property, primarily below the dam. Hunting is allowed but game populations are limited. The area does provide opportunities to hunt species such as quail, rabbit, white-tailed deer, turkey, squirrels, waterfowl, and prairie chicken. Camping is allowed (first come, first served) in designated areas along the north shore of the lake.

Chase State Fishing Lake and Wildlife Area is located in central Chase County, 1.5 miles west of Cottonwood Falls in the center of the scenic Flint Hills region of Kansas.

This latest discovery highlights the need for anglers and boaters to be aware of new bait regulations and the dangers of moving live baitfish and water between water bodies. On Jan. 1, 2012, new regulations designed to prevent further spread of aquatic nuisance species (ANS) require anglers to use wild-caught baitfish only in the lakes or streams where they were caught. In addition, livewells and bilges of boats must be drained prior to transport from any Kansas water on a public highway. And anglers may not transport live fish from any ANS-designated water. Chase State Lake is now an ANS-designated water.

Zebra mussels are bean-sized, bi-valve mollusks with striped shells. They are native to the Black and Caspian seas of western Asia and eastern Europe and have been spread across the world via shipping. They were discovered in Lake St. Clair and the Detroit River in 1988. Zebra mussels quickly spread through out the Great Lakes and to many inland rivers including the Mississippi, Illinois, Ohio, Tennessee, Arkansas and Hudson. They first appeared in Kansas in 2003 when they were discovered in El Dorado Reservoir. Public education programs were designed to inform boaters about the dangers of zebra mussels in our waters and ways to prevent spreading them. However, zebra mussels have been confirmed in more than a dozen Kansas lakes in the past nine years. Moving water in boats and bait buckets was identified as a likely vector.

Although related, zebra mussels differ from our native mussels in several important categories. Perhaps the most important is their ability to produce very large populations in a short time. Unlike native mussels, zebra mussels do not require a host fish to reproduce. A large female zebra mussel is capable of producing 1 million eggs during the reproductive season. Once fertilized, eggs develop into microscopic veligers. These veligers cannot be seen by the naked eye and thousands can survive in very small quantities of water. Veligers passively float within the water for up to two weeks before they settle out as young mussels. These young mussels quickly grow to adult size and reproduce during their first summer of life, thus adding to the problem of extremely dense populations.

After settling, zebra mussels develop byssal threads that allow the shells to attach to hard surfaces such as rocks, piers, and flooded timber. They also attach themselves to pipes, water intake structures, boat hulls, propellers, and lower units of out board motors. As populations continue to increase in these areas, they can clog intake pipes and prevent water treatment plants and electrical generating plants from drawing water. In 2012, two Kansas communities, Council Grove and Osage City, experienced water shortages because of zebra mussel infestations before water intake structures could be cleaned up. Removing large quantities of zebra mussels to ensure adequate water supplies can be labor-intensive and costly.

Zebra mussels are just one of the non-native aquatic species that threaten our waters and native wildlife. Boaters and anglers must remember to follow regulations and precautions that will prevent the spread:

• Clean, drain and dry boats and equipment between uses

• Drain livewells and bilges and remove drain plugs from all vessels prior to transport from any Kansas water on a public highway.

Chase State Fishing Lake and Wildlife Area is located in central Chase County, 1.5 miles west of Cottonwood Falls in the center of the scenic Flint Hills region of Kansas.

The 109 acre lake was constructed in 1954. A perpetual easement was granted to the Kansas Forestry, Fish and Game Commission (a predecessor of the Kansas Department of Wildlife, Parks and Tourism) for the lake and the 383 acre wildlife area that same year by Chase County. The easement granted complete control and management of the property to the State of Kansas. 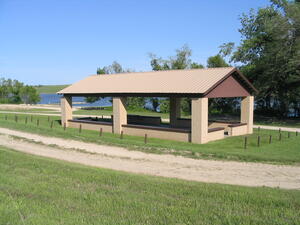 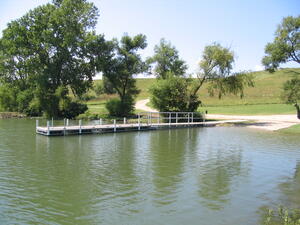