Due to construction crews working on water control structures, some wildlife area roads will be closed for 3-5 days at a time.  Road closed signs will be placed to notify visitors of the closures.

New regulations go into effect this fall.  As in the past, Pool 3A is closed to motorized boats.  Pool 4A closes to motorized boats at 1 p.m.  This means all boats with a motor on them must be out of the water in 4A at 1 p.m.  No running the motor out in 4A and then attempting just to row back after that.  All boats must be operated at no wake speeds.  No boats, motorized or not, are prohibited from April 15 - August 15 to protect nesting birds on the wildlife area.

A lot of work has been completed in the last year.  All electric pumps have been replaced.  Over 25,000 cubic yards of silt have been removed.  The Mitigation Marsh was scraped out 6-8" to make it a more functioning wetland.  Work is progressing on the new office, shop, and campground expansion.  A contractor is on sight replacing the drop structure (spillway).  Unfortunately, this means we will not be able to divert water for an extended period of time.  The storage pools were filled prior to the work.  Hopefully, water will be able to be diverted prior to the Fall of 2021.  Another contractor is on site working on water control structures.  Future work includes adding large propane pumps to the west hub to better facilitate water movement in Pool 2 and 5.  Also the current propane engines on the east side will be removed.

Visit the Kansas Wetlands Education Center at Cheyenne Bottoms. They have educational exhibits directed at describing the role wetlands play in the natural world with a focus on Cheyenne Bottoms. Find out the wide variety of wetlands found in Kansas, you may be surprised at the diversity in this grassland state. Their location is in the southeast portion of Cheyenne Bottoms Wildlife Area along Kansas Highway 156. Their hours are Monday through Saturday 9 to 5, Sunday 1 to 5. They are closed Mondays from November 1 through March 31.  The phone number is 620-566-1456.

Here are some helpful documents and articles for your trip Cheyenne Bottoms. 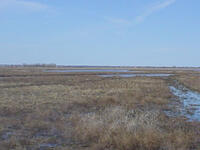 During the 1940's and1950s, the State of Kansas acquired the land, and dikes were constructed to impound water in five pools. Canals and dams were built to divert water from the nearby Arkansas River and Wet Walnut Creek to supplement water provided by two intermittent streams, Blood and Deception creeks.  Monies for this initial land purchasing and development came from two sources.  One was the sale of hunting licenses.  The second was from a Federal excise tax on sporting arms and ammunition.  The Federal Aid in Wildlife Restoration Act was passed in 1937.  This legislation allows for the collection of this excise tax money which is then apportioned out to each state with the amount received based on the total area of the state and the number of hunting licenses sold.  The program is a cost reimbursement program where the state covers the full amount of an approved project then applies for reimbursement through Federal Aid for up to 75% of the project expenses.  Cheyenne Bottoms was one of the first projects the State of Kansas embarked on using this Federal program.  Federal Aid continues to fund, along with hunting license dollars, the annual operation and maintenance of the property for all to enjoy.  Some of the best wildlife viewing opportunities can be had on land bought and maintained using these hunter generated dollars.

During the 1990s, extensive renovation sub-divided some of the pools. In addition, pump stations were built to allow for increased management flexibility and water level manipulation. This renovation effort also provided increased water conservation to better meet wildlife needs during dry periods. Manipulation of water levels in the pools is a major tool in managing the marsh for water birds. Another part of the renovation was the construction of large (2 to 5 acre) islands in Pools 3 and 4.  These islands served as locations to deposit accumulated silt in areas of chronic cattail stands.  They also are used by hunters and nesting birds.

Each year, one or more of the pools is drained as deemed necessary. Often these areas are seeded to millet and/or wheat and undesirable vegetation is controlled by burning, mowing and disking while the pools are dry. The photo below shows the current plant that is posing a threat to Cheyenne Bottoms. Phragmites is a wetland plant that, if left unchecked, can take over a marsh. It has even out competed cattail at Cheyenne Bottoms. 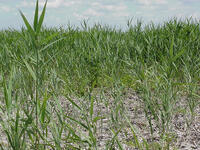 The History behind some of the parking lot names.

Several years ago names were given to the various parking lots located around the Wildlife Area.  The effort was being done to get away from the institutionalized numbering system in place and to recognize some of the history associated with the Bottoms.  Presented here are the names of the lots and the background behind them.

Coursing Club:  During the late 1800’s and early 1900’s a Coursing Club was located a bit north and west of the Wildlife Area office about 1.5 miles.  They used greyhounds to chase jack rabbits.

4 Corners:  Located northeast of the office 2 miles, this lot is close to the lodge of an early 20th Century duck hunting club by that name.

Brinkman:  Located 1 mile west and about 3 miles south of Redwing, this lot is named after an early landowner who settled in the northern portion of Cheyenne Bottoms in the 1870’s or 80’s.

Redwing:  Named after the small community located to the north of the parking lot.

Kinzel:  This lot, on the east side of Pool 3B, is named after a family residing in the area for some time.

Pike:  Located on the east side of Pool 3B, this lot is named after the explorer who passed through the basin in 1806.

Schrepel:  Located behind Pool 4A, this lot is named after the family that had a farm here in the early 1900's.

Deadman:  Located behind Pool 4A, off K-156 Highway, this lot is named after an incident in the late 1900's when a person was discovered having apparently committed suicide near the lot.

White Rock:  This lot is located on the south end of the Pool 4A/4B dividing dike.  Following the renovation of the 1990’s, this parking lot was surfaced with crushed limestone rock giving it a white color.

Ridge Road:  A military road from Fort Harker to Fort Larned crossed the basin in the mid to late 1800's.  In periods of wet conditions travelers shifted their route to the south following a ‘ridge’ around the basin avoiding the water.

Green Lake:  Prior to development as a wildlife area, several small depressions held water longer than the rest of the basin when going dry.  Located north of this lot about 1 ¼ miles, on the east end of the Goose Hunting Zones,  was Green Lake.   It was one of these depressions.

Silo:  This parking lot on the Goose Hunting Zones is named for the long standing landmark north of the lot.

Gunnery:  During World War 2 the Army Air Corps used the Bottoms as a training/target area for plane crews flying out of the Great Bend Airfield.  Located less than a mile west of this lot, on the west end of the Goose Hunting Zones, were gun emplacement structures used for small arms/machine gun practice.

Hunting pressure on the Bottoms can be heavy during waterfowl season, particularly on weekends. Hunters planning trips to the Bottoms should consider weekday hunts.

Prior to hunting any species on Cheyenne Bottoms Wildlife Area, all hunters are required to check-in here, https://ksoutdoors.com/checkin using your licensing login credentials.

Pools 1, 5 and a portion of Pool 2 are refuge areas and closed to all activities. Exceptions to this occur for some special hunts. Check with wildlife area personnel for more information.

In addition to waterfowl, other game may be legally taken at Cheyenne Bottoms. Pheasant hunting is usually good. Snipe and rail hunting is good along the shallow marsh margins. Quail and deer are also present in fair numbers.

A handicapped accessible hunting/photo blind is available by reservation. Call the office for additional information and reservations.

In the event of whooping crane activity, the pool the birds are in is closed to all hunting and the goose hunting zones are closed to crane and light goose hunting. 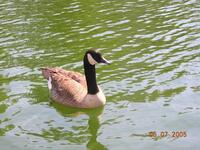 Because Cheyenne Bottoms is such a diverse, large and unique marsh, birdwatching is one of the more popular activities on the area. The spring and fall migration periods offer the best opportunity to view large numbers of different species in this one location. In spring, waterfowl and sandhill cranes can begin arriving as early as February. Wading birds, such as herons and egrets, begin arriving in March and April. Most shorebirds arrive in late April and early May. By late May, the birds that are still present on the area will tend to remain and nest.

The southward migration in fall can be a rewarding and challenging time for the birdwatcher. Most of the birds moving through the area during this time of year have replaced their breeding plumage with a set of feathers that lack much of the color they had just a few months earlier. This can make identification difficult, especially when looking at shorebirds. The fall shorebird migration can begin as early as July and extend well into September and October. Because of this, the bird numbers are not as impressive as the spring movement since the birds do not achieve as great a number at any one time. The peak period for duck viewing in the fall occurs early to mid-October. Most wading birds remain on the area until the marsh freezes. This is especially true for the great blue heron. Whooping cranes are most apt to stop at Cheyenne Bottoms in late October into early November. Bald eagles winter on the area and are present from as early as November to as late as March. A checklist of birds found on the area and the seasons they are present is available at the area office and the information signs at the main entrances. You may also download this list from this web page.

If you go to Interesting Facts, here on the Cheyenne Bottoms web page, you will find the nedian dates of first observation of many different species of birds. These observations are a compilation of data collected at Cheyenne Bottoms over the past 30 years.

For a current idea of birds present on the Area, go to Cheyenne Bottoms Wildlife Area News.

Fishing at Cheyenne Bottoms is limited, for the most part, to carp and bullheads. Occasional catches of channel cat, crappie and bass are made after several continuous years of having water on the area.

Trapping is permitted on the wildlife area. A special permit is required. It is available at the area office free of charge. However, trapping is not permitted at any time in the refuge area nor during the waterfowl season.