This beetle is shiny black with the elytra (wing covers) having two orange-red markings. The most diagnostic feature of this beetle is the large orange-red markings on the raised portion of the pronotum. The species is up to 1.5 inches long. Historically, Kansas records exist in the eastern one-third of the state. The American Burying Beetles have been frequently found in upland grasslands or near the edge of grassland/forest. Sandy/clay loam soils and food (carrion) availability are also important. The species appears to prefer loose soil in which carrion can be easily buried. Since 1996, populations were found in four southeast counties in Kansas. 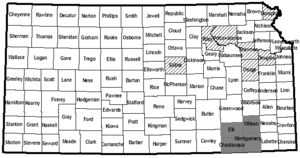