The Black-capped Vireo is about 5 inches long. Males have olive green backs, white undersides, and faintly yellowish green flanks. The upper half of the head is black with white lores and partial eye-ring giving the appearance of white spectacles. The eye is brownish red and the bill black. Females are duller colored with a more gray head and the underside washed with greenish yellow.

Historical nesting records are known only from Comanche County, however, the bird likely nested in suitable habitat throughout the Red (Gyp) Hills region in southcentral Kansas. Preferred habitat is low dense tree-shrub growth in ravines in native prairie. Although sight records from Harvey and Rice counties are documented, there have been no records of the bird in the state since 1953. Its current probable range is limited to Barber, Clark, and Comanche counties. Occurrences outside of that three-county area would be considered accidental. 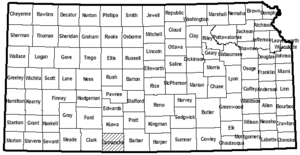 Black-capped Vireos are most likely to occur as summer visitants or residents in southcentral counties. At present, no specific locations have been designated critical.

The U.S. Fish and Wildlife Service also has authority to designate areas of critical habitat for federally listed endangered species, but has not done so for Black-capped Vireos in Kansas.

The following counties contain critical habitat for BLACK-CAPPED VIREO: There are no related objects.