Black-footed ferrets have a pale buff background color becoming nearly white on the face, throat, and ventral half of the body. The top of the head and saddle area of the back are brown. There is a black mask across the eyes and the feet, while the legs and terminal fourth of the tail are black to blackish brown.

Ferrets are totally dependent upon prairie dog burrows for cover and upon prairie dogs and other small mammals for food. Blackfooted Ferrets once ranged over approximately the western 2/3 of Kansas in association with black-tailed prairie dogs. Extensive conversion of rangeland to cropland plus widespread poisoning of prairie dogs have destroyed most of the state’s ferret habitat. There remains some larger areas of short-grass prairie in western Kansas that may still have isolated prairie dog towns capable of supporting Black-footed Ferrets.

The U.S. Fish and Wildlife Service reintroduced captive-bred black-footed ferrets onto two ranches in Logan County in 2007, and has been monitoring them since.  The population is not large, but annual fall surveys document that reproduction has occurred every year.  Supplemental releases have occurred since 2007, but reproduction of existing animals on site remains the primary means of maintaining the population. Prior to the reintroductions in Logan County in 2007, the last confirmed record of a live ferret in Kansas was in Sheridan County in December, 1957. 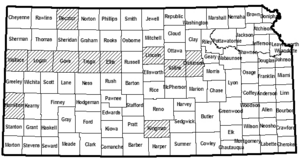 Since there has been no confirmed record of a live wild ferret in Kansas since 1957, it is unknown if any sustaining ferret populations still exist in the state. The U.S. Fish & Wildlife Service and Kansas Department of Wildlife, Parks and Tourism has a continuing program of investigation of ferret reports. To date, there are no designated areas of critical ferret habitat in Kansas.

The U.S. Fish and Wildlife Service also has authority to designate areas of critical habitat for federally listed endangered species, but has not done so for Black-footed Ferret in Kansas.

The following counties contain critical habitat for BLACK-FOOTED FERRET: There are no related objects.