This freshwater mussel is triangular in shape with a moderately thick shell that is compressed. External shell color is yellow to tan and covered with dark rays composed of dots, dashes and chevrons. Maximum length is approximately 5 inches.
This species is an obligate riverine mussel preferring clean water with good current over gravel substrate. Its historic range included the Neosho, Spring, Fall and Verdigris Rivers. Although rare, the Butterfly Mussel has been found at some mussel survey sites in the Verdigris and Marais des Cygnes Rivers between 2000 - 2010, and the Neosho. 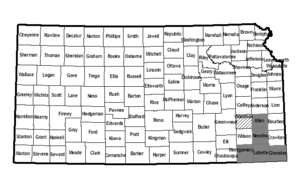 Butterfly Mussels are protected by the Kansas Nongame and Endangered Species Conservation Act and administrative regulations applicable thereto. Any time an eligible project is proposed that will impact the species’ preferred habitats within its probable range, the project sponsor must contact the Ecological Services Section, Kansas Department of Wildlife, Parks and Tourism, 512 SE 25th Ave., Pratt, Kansas 67124-8174. Department personnel can then advise the project sponsor on permit.