The Black Tern needs wetland marshes and shallow lakes and ponds, relatively large size, with approximately 50% emergent vegetation. They require emergent vegetation of floating mats on which to build nests. The birds also need open water areas for foraging for insects and minnows, their main food source, and frequently forage over small ponds and open streams.
The Kansas status and range of the Black Tern is statewide during migration; nesting has been confirmed at Cheyenne Bottoms and Quivira National Wildlife Refuges. They are usually a late April migrant but have seen as early as March 20. The normal arrival time is April to September. The nesting population is unknown, only that it occurs. The global decrease in population will effect the number of migrants coming through Kansas. Large numbers can be seen at the central Kansas marshes, where apparently many nonbreeding birds remain during the summer; a few nest. 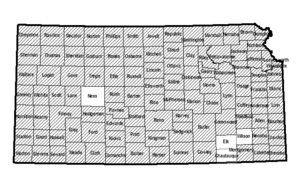