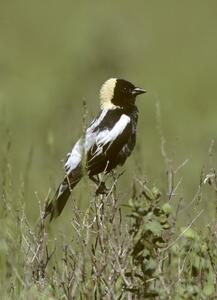 The Bobolink prefers tall grasslands such as wet meadows, hayfields, and moist tallgrass prairie. Migrants frequently visit alfalfa fields. They nest on the ground in a shallow depression made of grasses and weed stems. The birds feed on beetles, grasshoppers, caterpillars, and other small invertebrates as well as seeds of various grasses and weeds. In seasons other than summer, they feed primarily on domestic and wild grain and weed and grass seed.
The Bobolink is an irregular transient and summer resident in eastern and central Kansas. It is casual westward where it may possibly breed very locally. Nesting has been confirmed from Barton, Cloud, and Stafford counties. The spring migration falls mainly between May 2 to May 20. The fall migration ranges, with poor documentation, from August 15 to October 13, or even April 2 to October 13. They nest in southern Canada and the northern United States, south to eastern Oregon, Kansas, and West Virginia. It winters in southern South America. 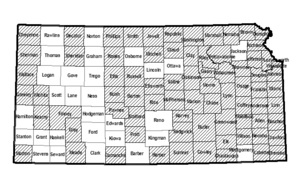