The Chihuahuan Raven is the largest member of the crow family still found in Kansas. In the summertime, it is usually found in the far western part of the state. They do not require trees, but their stick nests may be found in isolated trees and on windmills on the prairie. Their breeding range formerly encompassed the western part of Kansas along the Colorado border eastward to as far as Ford, Kearny, Finney, and Gray counties. They have been seen at garbage dumps in Seward County. It is probably an opportunist and will eat carrion or vegetable matter as it is available.
The Chihuahuan Raven has been recorded as occurring every month of the year. This species appears to be an uncommon summer resident in the extreme southwestern part of the state and rare elsewhere in the state. It is a rare winter resident in the west and may occasionally wander eastward in the winter.
This species needs arid areas, particularly desert and scrubby grasslands. They are mistakenly harvested for crow. 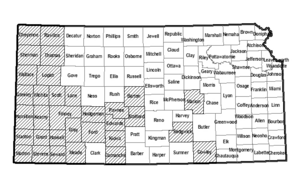