The Common Shiner has undergone a substantial reduction in its historic range in Kansas. It once occurred through much of northern Kansas, in tributaries of both the Kansas and Missouri rivers. Most collections of Common Shiner between 1994 and 2011 have come from streams in the Kansas River basin, and from small streams in the glaciated region of northeastern Kansas. No records have been found in extreme western Kansas since 1958 except for one specimen caught and released by a Kansas Stream Survey and Assessment crew in 1995. The Common Shiner is believed to have been significantly reduced in range and abundance in Kansas. It prefers small to medium-size streams with clear, cool, weedless water, a moderate to swift current, and alternating pools and riffles (Cross and Collins, 1995). It is present only in the Kansas River system, in streams with gravel bottoms. Although the western Kansas range reduction occurred in the 1950’s the Common Shiner is still found locally abundant in 47 streams in 13 counties, but bears close monitoring. 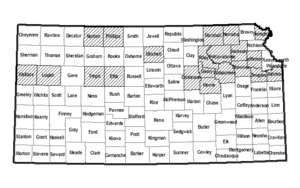