In the summertime, the Curve-billed Thrasher is restricted to arid parts of the southwest, usually in sandsage grasslands and usually near a cholla cactus. In the winter they wander and have been reported in barnyards, windbreaks, cemeteries, and brushy ravines. Breeding has been reported from Hamilton, Gray, Kearny, and Morton counties. Nest building began by mid-April; in each case the nest was in a cholla cactus. They feed on insects and small invertebrates and a considerable amount of fruit and berries, especially in winter.
The Curve-billed Thrasher has been reported during all months in the southwest. Most sightings elsewhere are between November 2 and April 23, but a few have been sighted in May and June. This bird is a casual visitor and occasional (local) summer resident in the southwest, where it is apparently a resident some years. It is vagrant to casual elsewhere in the north and east to Norton, Ellis, Barton, Reno, and Cowley counties. 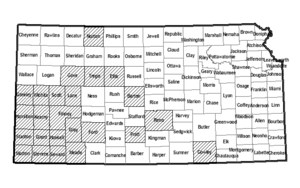