This freshwater mussel has an elongated, moderately fat shell. When the dorsal margin is viewed straight on, the outline appears shaped like an elk or deer track. The shell is usually yellow to light brown with numerous greenish zig-zag rays and dots on the outer surface. Internal color is white or iridescent. Maximum length is about four inches.

The species is an obligate riverine species that prefers silt to gravel substrate in moderate flowing streams. Historically it occurred in the Spring and Marais des Cygnes Rivers. It is declining to the point that only a few specimens have been found in the Spring River in recent years. 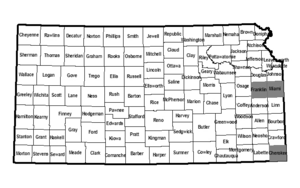 Elktoe Mussels are protected by the Kansas Nongame and Endangered Species Conservation Act and administrative regulations applicable thereto. Any time an eligible project is proposed that will impact the species’ preferred habitats within its probable range, the project sponsor must contact the Ecological Services Section, Kansas Department of Wildlife, Parks and Tourism, 512 SE 25th Ave., Pratt, Kansas 67124-8174. Department personnel can then advise the project sponsor on permit requirements.

Currently, the following areas are designated critical for Elktoe Mussels: