The Whip-poor-will is a locally common transient and summer resident in the eastern part of the state. The range in eastern Kansas seems to be shrinking as the chuck-will's-widow continues to encroach upon its traditional territory. Both species occupy woodlands, apparently of the same composition; the Whip-poor-will does not seem to compete and disappears from the area.
It breeds west to at least Riley County, but its breeding status and western distribution are poorly known. They have been recorded to occur from April 3 to October 14. The birds feed on insects taken on the wing at dusk and dawn. 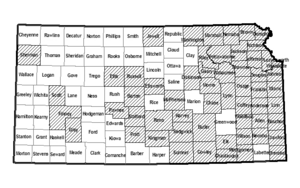