The Flathead Chub is one of the larger chub species growing to 9 inches. It has a broad wedge-shaped head, large mouth, and one small barbel on each side of the mouth. Its color is light greenish or brown on the back and plain silvery on the sides. Flathead Chubs formerly occurred in the main stems of the Missouri, lower Kansas, Republican, Arkansas, and Cimarron Rivers. Since 1995, the only documented populations of this species in Kansas were found in the extreme upper reaches of the Arkansas River and in the S. Fork Nemaha River. They are known to still occur in out-of-state reaches of the Arkansas and Cimarron Rivers so may still occur in Kansas during high flow periods. The Flathead Chub occurs from the Rio Grande to the Arctic Circle in small creeks and the largest rivers that have turbid fluctuating water levels and unstable sand bottoms. As with several other plains fishes, the chub relies on flood flows to successfully spawn. 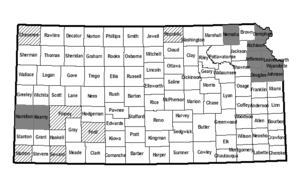 Flathead Chubs are protected by the Kansas Nongame and Endangered Species Conservation Act and administrative regulations applicable thereto. Any time an eligible project is proposed that will impact the species’ preferred habitats within its probable range, the project sponsor must contact the Ecological Services Section, Kansas Department of Wildlife, Parks and Tourism, 512 SE 25th Ave., Pratt, Kansas 67124-8174. Department personnel can then advise the project sponsor on permit requirements.

Currently, the following areas are designated critical for Flathead Chubs: