The Franklin's Ground Squirrel inhabits the eastern half of Kansas. It extends westward along riparian vegetation in the northern part of the state and is associated with the zone where tallgrass prairie and deciduous forest come into contact. It prefers the sheltered cover of dense grasses, weedy fields and wastelands, and shrubby forest edges.
They are active mainly during the day but spend a large amount of time underground. The squirrels may live in colonies of 10-100. During hot weather, these squirrels may aestivate. They hibernate from around the last of July to September and extend until April or later.
This squirrel breeds in late April or May and may have 2-13 (usually 6-9) young a year. The young mature by the following spring. They fed on green vegetation, seeds, grasses, insects, and some small vertebrates. The Franklin's Ground Squirrels are regarded as important predators of ground nesting birds in some areas. Badgers, coyotes, foxes, weasels, snakes, and hawks prey upon this squirrel. Its maximum longevity is considered to be five to six years. 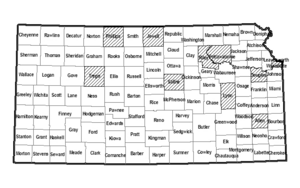