The Gray Myotis is the largest of the Myotis species occurring in the eastern U.S. It is distinguished from all other bats within its range by its unicolored grayish brown dorsal fur. All other eastern bats have bi- or tri-colored fur on their backs. The Gray Myotis is almost totally cave dwelling and occupies a limited geographic range in limestone cave regions of the southeastern U.S. In Kansas, the only known populations are dependent on storm sewers within the Cherokee Plain region in the southeast corner of the state. Nearby streams with adjacent woodlands provide critical foraging habitat. These bats seem to especially utilize woody stream corridors and even linear tree plantings as travel lanes between storm sewer openings and their preferred foraging areas. Foraging is generally over water. 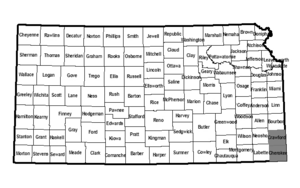 Currently, the following areas are designated critical for Gray Myotis: