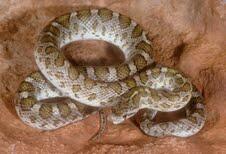 The Glossy Snake is found in dry, open, sandy areas. Little is known of its habits, but apparently it is active from April to October. They are primarily nocturnal, prowling for food. During the day it retires beneath rocks or into burrows to avoid the heat and predators.
This snake mates during May, June, or July following emergence from winter activity. The female lays a single clutch of eggs ranging from 3-23 eggs with an average of 8. Eggs hatch in 2-3 months. They kill their food by constriction, and feed primarily on lizards and small rodents. Predators of this species probably include snakes, mammals, and owls.
The range of the Glossy Snake is in western Kansas, southwest of a line from Cheyenne, Rice, and Harvey counties. Statewide population trends are unknown, but it continues to be a common species in at least part of its range in the state. Records and recent accounts from experts indicate that the Glossy Snake is stable in Kansas and is not in any great jeopardy. 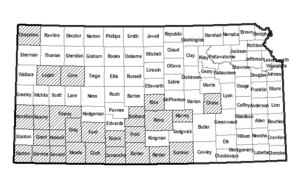