The Golden Eagle is not closely related to the bald eagle, and more resembles large Buteo in its habits. It occurs most regularly over open grasslands in western Kansas, but it winters sporadically eastward. The birds are usually shy and nesting sites are fairly isolated. Each pair occupies a large home range of thirty-five square miles. Most hunt either from a perch or by a steep dive from a considerable height; pairs frequently hunt together.
Courtship involves spectacular, aerial maneuvers, and pairs are said to mate for life. Recent nests in Kansas were built in isolated trees in native grassland or on the steep sides of deeply eroded gullies. Nests may be rebuilt and used in successive years, or a pair may alternate from different nests in the same general area. Within its range, which covers most of the temperate zone, the eagles feed on a great variety of vertebrates, with jackrabbits, cottontails, rodents, and snakes predominating. They also take large prey occasionally. However, studies show that their predation on healthy domestic livestock has been greatly exaggerated.
A considerable amount of carrion may be eaten in the winter. Golden Eagles are an uncommon transient and winter visitor, chiefly in the west. There is one early report of breeding and recent nesting in four far western counties. They are most common from early October through early April. Extreme dates, for nonbreeding birds, are September 2 and May 8. Midsummer vagrants occur occasionally in the east. 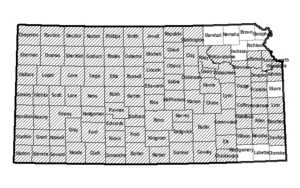