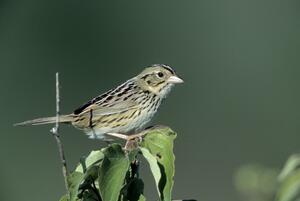 The Henslow's Sparrow is primarily a breeder in the northeastern United States and winters in the Gulf states. It is a very local summer resident in Kansas, but it is probably more widespread as a transient and is probably often overlooked. This species spends most of its time on the ground in dense vegetation and is a difficult species to flush and observe. In much of its range, it prefers moist areas, but in others, as at Konza Prairie, it occurs in dry upland prairie.
The nests of Henslow's Sparrows are well hidden on the ground under grass clumps that overhangs and covers the nest. The female lays 3-5 eggs, the incubation is by the female alone. In some areas, they are at least semicolonial. They feed on grasshoppers, crickets, beetles, caterpillers, ants, and other invertebrates and, during the nonnesting season, on seeds of a variety of grasses, sedges, and weeds.
This species is an uncommon transient and very local summer resident in eastern Kansas. They occur in Kansas from April 14 through October 15. The relatively few sight records of transients are from April 10 to May 4 and August 3 to October 26. Nesting has been documented from Anderson, Geary, Morris, Riley, and Shawnee counties, and single males have been observed during the breeding season at other localities in eastern Kansas. The largest and most stable population in Kansas is at the Konza Prairie. 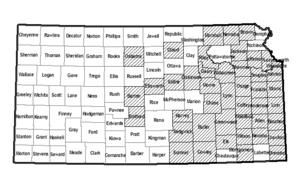