This smallest of the North American terns is 8-10 inches long with a wingspread of about 20 inches. The adult is white below and grayish above with a black cap and white forehead. The leading edge of the wing primaries is also black.

Least Terns are summer residents in Kansas. Nesting birds have been recorded in six central and western Kansas counties, Jeffery Energy Center and along the Kansas River. Terns require barren areas near water such as saline flats in salt marshes, sand bars in river beds, and shores of large impoundments. A dependable food supply of small fish and aquatic crustaceans must be nearby.

Least Terns may occur accidentally or occasionally as transients anywhere in the state. The marked counties are the only ones for which reliable records are known. 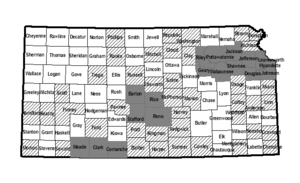 Currently, the following areas are designated critical for Least Terns:

The U.S. Fish and Wildlife Service has authority to designate areas of critical habitat for federally listed endangered species, but has not done so for Least Terns in Kansas.