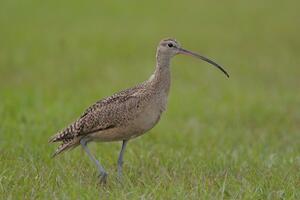 The Long-billed Curlew is an uncommon transient in the western half of the state and rare in the eastern half. It breeds rarely in the southwest and appears casually as a nonbreeder elsewhere in summer. They were former breeding birds in Kansas but now records show breeding only in Morton, Finney, and Stanton counties.
They nest in arid places usually remote from water. The birds feed by probing the mud with their long bills for invertebrates such as worms. In upland areas, they feed on insects and probably on berries when available.
The easiest place to observe Long-billed Curlews is at Cheyenne Bottoms Wildlife Management Area or Quivira National Wildlife Refuge. They are also seen readily in the summer on their nesting grounds on dry upland pastures in Morton County. Although they are not abundant, there is a reasonably good chance of seeing them during migration. Few remain to nest, the rest depart approximately March 23 and most by May 17. Migrations southward are hard to determine, but birds have been seen from August 21 to September 25.