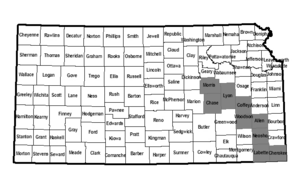 Currently, the following areas are designated critical for Neosho Madtoms:

(1) The main stem Cottonwood River from the point it enters Chase County at Sec. 1, T21S, R5E to its confluence with the Neosho River at Sec. 23, T19S, R12E, Lyon County.
(2) The main stem Neosho River from its point of discharge from Council Grove Reservoir in Sec. 10, T16S, R8E, Morris County to the point it leaves Lyon County in Sec. 15, T20S, R13E.
(3) The main stem Neosho River from its point of discharge from John Redmond Reservoir at Sec. 10, T21S, R15E. Coffey County to the Kansas-Oklahoma border at Sec. 18, T35S, R22E, Cherokee County.
(4) The main stem Spring River from the Kansas-Missouri border to a point where it crosses the west boundary of Sec. 36, T33S, R25E, Cherokee County.
(5) The main stem of the South Fork of the Cottonwood River in Chase County where it enters Sec. 14, T20S, R8E, until its confluence with the Cottonwood River (Sec. 25, T19S, R8E). The U.S. Fish and Wildlife Service also has authority to designate areas of critical habitat for federally listed endangered species, but has not done so for Neosho Madtoms in Kansas.