This small (2 3/4 inches) chub has a slender, nearly transparent body with small dark dots scattered on its back. The fish's mouth is small and ventral with four prominent barbels.

This species prefers shallow channels of permanently flowing streams where currents flow over clean fine sand. It avoids calm waters and silted stream bottoms. This fish is found in the lower Arkansas River and its major tributaries. The species of Chub found in the Arkansas River basin formerly occurred as far west as Holcomb in both the Arkansas River main stem and the lower reaches of the river's larger tributaries. Due to dewatering of western Kansas streams, the fish is now restricted to the lower portions of the river's basin in Kansas. 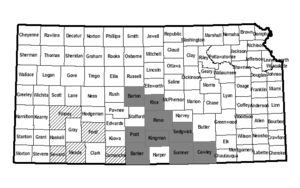 Peppered Chubs within the Arkansas River basin are protected by the Kansas Nongame and Endangered Species Conservation Act and administrative regulations applicable thereto. Any time an eligible project is proposed that will impact the species? preferred habitats within its probable range, the project sponsor must contact the Ecological Services Section, Kansas Department of Wildlife, Parks and Tourism, 512 SE 25th Ave., Pratt, Kansas 67124-8174. Department personnel can then advise the project sponsor on permit requirements.

Currently, the following areas are designated critical for Peppered Chubs: