The Piping Plover is a small (6-7 inches long) whitish plover the color of dry sand. It has a narrow black band above the forehead which reaches from eye to eye, a complete or incomplete dark ring around the neck, and yellow legs. In summer, the bill is yellow with a dark tip. In winter bill and legs are dark.
Piping Plovers are rare migrants through Kansas. They require sparsely vegetated shallow wetlands and open beaches and sandbars adjacent to or within streams and impoundments. Nesting has been recorded on sand bars along the Kansas River. Piping Plovers may occur occasionally anywhere in the state where suitable habitat is found. The marked counties are the only ones for which observation records are known. 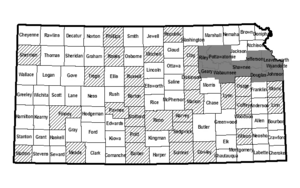 Currently, the following areas are designated critical for Piping Plovers:

The U.S. Fish and Wildlife Service has authority to designate areas of critical habitat for federally listed threatened species, but has not done so for Piping Plovers in Kansas.