The Plains Minnow was once considered one of the most common bait fishes due to its size and abundance. The species is now scarce where it was the most predominant fish in the 1950's. The Plains Minnow is a minor component of the fish assemblage in the Republican, Smoky Hill and Arkansas rivers where it was once abundant. It remains a significant portion of the fish fauna in the Cimarron River. This species needs sufficient water flow and flow rates with high and low extremes in order to complete its life cycle. The Plains minnow is partly herbivorous and has a long gut and black-lined body cavity. It feeds in schools near the bottom where sediments accumulate on sandy substrates. High flows during the summer trigger spawning and the semi-bouyant eggs hatch as they are carried downstream where flow is more reliable. Few of these minnows live longer than 2 years. The Plains Minnow has small eyes, thin lips and grows to 5 inches but it otherwise relatively nondescript. 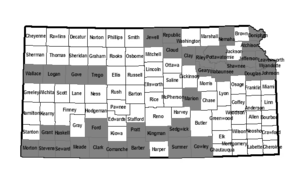 Plains Minnows are protected by the Kansas Nongame and Endangered Species Conservation Act and administrative regulations applicable thereto. Any time an eligible project is proposed that will impact the species’ preferred habitats within its probable range, the project sponsor must contact the Ecological Services Section, Kansas Department of Wildlife,Parks and Tourism, 512 SE 25th Ave., Pratt, Kansas 67124-8174. Department personnel can then advise the project sponsor on permit requirements.