This freshwater mussel is an elongated, rectangular shaped shell, moderately inflated with thick to moderately thick shell. The posterior ridge has longer, distinctive knobs. The exterior of the shell is olive, sometimes yellow-brown and is usually covered with dark green or black triangles. The nacre (inside of shell) is white. The shell can reach a maximum length of 4 inches. 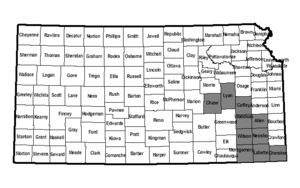 Rabbitsfoot Mussels are protected by the Kansas Nongame and Endangered Species Conservation Act and administrative regulations applicable thereto. Any time an eligible project is proposed that will impact the species' preferred habitats within its probable range, the project sponsor must contact the Ecological Services Section, Kansas Department of Wildlife, Parks and Tourism, 512 SE 25th Ave., Pratt, Kansas 67124-8174. Department personnel can then advise the project sponsor on permit requirements.

Currently, the following areas are designated critical for Rabbitsfoot Mussels:

(2) Neosho River: from Iola to Humboldt (Allen Co.); from I-35 to the river's confluence with the Cottonwood River (Lyon County); from John Redmond dam to the Kansas-Oklahoma border.

(4) Shoal Creek: from the Kansas-Oklahoma border to the backwater of Empire Lake (Cherokee Co.)

(5) Fall River: from the Fredonia city dam to the river's confluence with the Verdigris River (Wilson Co.).

(6) Verdigris River: from K-47 (Wilson Co.) to the Kansas-Oklahoma border.