The mussel is triangular in shape with the dorsal margin nearly straight and the ventral edge rounded in the shape of a bow. The shell is thick and can grow up to 4.5 inches in size. Growth ridges and grooves have distinct color changes. It is a heavily sculptured mussel.

In Kansas, an obligate riverine mussel adapted to mud, silt and silty gravel substrates where it prefers quiet water areas and usually buries itself in the soft mud of the river bottom. Historically occurred in medium to large streams in the Marais des Cygnes basin. 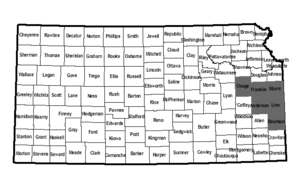 Rock Pocketbook Mussels are protected by the Kansas Nongame and Endangered Species Conservation Act and administrative regulations applicable thereto. Any time an eligible project is proposed that will impact the species’ preferred habitats within its probable range, the project sponsor must contact the Ecological Services Section, Kansas Department of Wildlife, Parks and Tourism, 512 SE 25th Ave., Pratt, Kansas 67124-8174. Department personnel can then advise the project sponsor on permit requirements.