The shell of the sharp hornsnail is thick and heavy, somewhat conical in shape and much elongated. The whorls are rather flat to slightly convex and usually exhibit nine to eleven whorls. The color of the shell varies from pale brown to dark chestnut, with some specimens showing variable banding. On the average, the adult is about 1 1/8 inches long with a width at the widest point of 3/8 inch.

Historically, this snail was collected from the Walnut River and the Marais des Cygnes River. In 1998, it was collected on the Marais des Cygnes River. The snail inhabits shallow (from a few inches depth up to three feet) sheltered reaches of larger lakes and streams. Generally, they can be regarded as bottom dwellers, since they burrow under the sand. They may also burrow under layers of decaying leaves and organic materials. This snail is a detritus feeder, mainly eating algae and diatoms. 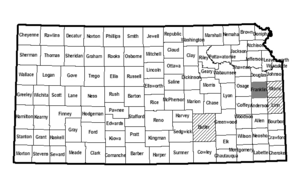 Sharp Hornsnail are protected by the Kansas Nongame and Endangered Species Conservation Act and administrative regulations applicable thereto. Any time an eligible project is proposed that will impact the species’ preferred habitats within its probable range, the project sponsor must contact the Ecological Services Section, Kansas Department of Wildlife, Parks and Tourism, 512 SE 25th Ave., Pratt, Kansas 67124-8174. Department personnel can then advise the project sponsor on permit requirements.

Currently, the following areas are designated critical for Sharp Hornsnail: