The shoal chub inhabits shallow riffles of large low-gradient streams of shifting sand. It is currently found in the Republican and lower Kansas rivers. However, it is now considered rare in the Kansas River where it was once abundant. It was previously classified as a subspecies of the speckled chub until research showed they were separate species (shoal and peppered chub). The lifespan is relatively short as few fish live beyond their first year. The spawning season is long (May-August) and occurs after rainfall events increase flow. The eggs develop as they drift downstream. The shoal chub is relatively small (to 2 ¾ inches), has small eyes, black speckling on its back and a fleshy extension referred to as a barbel at the corner of its mouth. 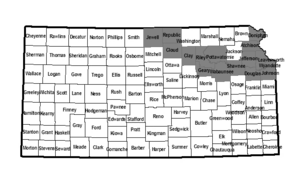 Shoal Chubs are protected by the Kansas Nongame and Endangered Species Conservation Act administrative regulations applicable thereto. Any time an eligible project is proposed that will impact the species’ preferred habitats within its probable range, the project sponsor must contact the Ecological Services Section, Kansas Department of Wildlife, Parks and Tourism, 512 SE 25th Ave., Pratt, Kansas 67124-8174. Department personnel can then advise the project sponsor on permit requirements.