This member of the minnow family can reach 6 inches in length. The silver chub has a blunt, rounded snout, a silvery patch in front of its large eyes, and a narrow, bright, silvery streak along the sides. There are small conical barbels at the corner of its mouth that are sensitive to taste.

The silver chub is a fish of large sandy rivers. It lives on or near the bottom where it finds food by sight or taste. It is found in deep water during the summer months. Few are thought to live longer than 3 years.

It was once common in the Kansas and Missouri rivers, but now is so infrequently found during sampling efforts it is considered rare. No collections from the Kansas River have been documented at the University of Kansas Museum of Natural History since 1980. However, specimens have been found during surveys in the Arkansas River and some of its tributary streams including the Ninnescah River. Most of its natural range is east of Kansas and includes the Ohio and Mississippi river basins. In Lake Erie it is known to feed on the invasive zebra mussel. 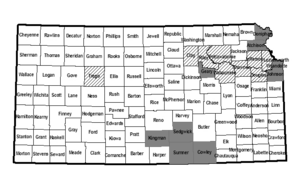 Silver Chubs are protected by the Kansas Nongame and Endangered Species Conservation Act and administrative regulations applicable thereto. Any time an eligible project is proposed that will impact the species' preferred habitats within its probable range, the project sponsor must contact the Ecological Services Section, Kansas Department of Wildlife, Parks and Tourism, 512 SE 25th Ave., Pratt, Kansas 67124-8174. Department personnel can then advise the project sponsor on permit requirements.