In Kansas, this small (1-1 5/8 inches) chorus frog is at the northern edge of its continental range. Body color may vary from brown to gray, green or hazel. It has a dark line through the eye and a dark spot below and just in front of each eye. There are scattered dark spots and blotches on the animal's back.

Habitat at known locations in Kansas usually consists of shallow, run-off pools of relatively unpolluted water where some wetland vegetation is present and no predator fish occur. Strecker's Chorus Frogs were formerly known to occur only in Barber and Harper counties. In 2004, a disjunct population was found in Pratt, Barber and Kingman counties. 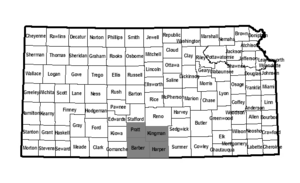 Strecker's Chorus Frogs are protected by the Kansas Nongame and Endangered Species Conservation Act and administrative regulations applicable thereto. Any time an eligible project is proposed that will impact the species' preferred habitats within its probable range, the project sponsor must contact the Ecological Services Section, Kansas Department of Wildlife, Parks and Tourism, 512 SE 25th Ave., Pratt, Kansas 67124-8174. Department personnel can then advise the project sponsor on permit requirements.