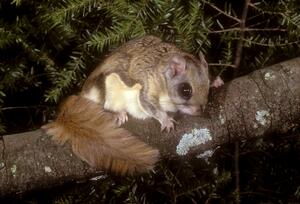 The Southern Flying Squirrel is found in the eastern third of the state among groves of dense deciduous forests, especially the native oak-hickory community. It is rarely seen because of its strictly nocturnal habits. They are best located at night with a flashlight around old woodpecker holes.
They may breed twice a year with a litter of 2-7 young. The nest is located in a tree hollow and is lined with shredded bark and other soft plant material sufficient to insulate it against the lower winter temperatures; this squirrel does not hibernate but is the only nocturnal one in the state. Old woodpecker holes are often occupied. They share the nest with other Southern Flying Squirrels for warmth.
The squirrels feed on green vegetable matter, buds, flowers, fruit, seeds, berries, mushrooms, insects, and nuts of various kinds. Nocturnal predators that prey upon this squirrel include bobcats, coyotes, foxes, snakes, and especially owls. Maximum longevity of this mammal is five years in the wild, and it can live ten years in captivity. 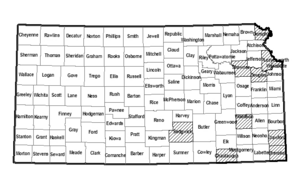